The current issue (July/Aug 2013) of Narrow Gauge and Short Line Gazette features a station construction article by Bob Bennett. He built a model in O scale of an E.L. Moore station plan. Bob modified the plans to reflect his Maine narrow gauge modelling. The model is not a true model of the Eustis Jct. but does reflect what one would find along the Maine two footers. The Gazette also includes a copy of the original RMC April 1964 plans. I think it is great looking model and well worth considering if one is a two foot modeler. Bob has inspired me to try this model for myself once my modelling season begins again this fall. Since 2014 will be the 50th year of the plans, I plan on starting my model in January 2014...I should have all the parts collected by then...I will keep you posted as the project moves along. Thanks Bob for the great inspiration...George Dutka
Posted by George Dutka at 06:59 No comments:

The following photos I took of the display at last fall's Expo in Lancaster, Pa. I had stopped by the Portland Locomotive Works booth but no one was there at the time. For some reason I did not get back again, but will make a point of it this fall...George Dutka 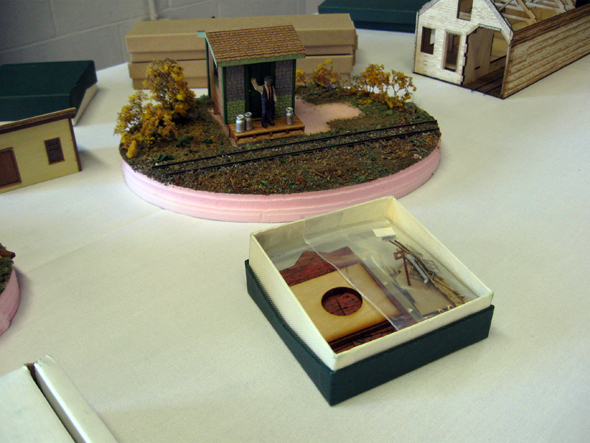 Posted by George Dutka at 17:20 No comments: 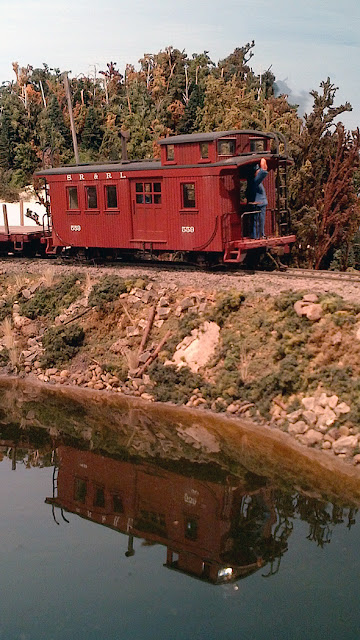 Posted by George Dutka at 04:26 No comments:

I have had a love affair with the Maine two footers dating back to when I first began modeling in the late 1970’s.  My HOn30 modeling back then was the Carrabassett and Quebec Railroad, a two by four foot module which was part of the Thames Valley Central Modular Club here in London, Ontario. The years have passed by quickly since then. Today my main focus is still New England modeling but in HO scale standard gauge as the White River Division. I have not done much Maine two foot modeling in years but I have held onto my kits and finished models.

The Design
At the beginning of my 2008 modeler’s season I was trying to decide if I should keep or sell my HOn30” equipment. It seems as if it had been packed away forever.  A thought occurred. Maybe using the finished models I have I could build a few small dioramas and once again display my Maine two footers. These dioramas would display my impression of a completed C&Q Ry or as a few functional two footer locales. The first to be constructed was an engine turning facility that would use my turntable saved from the modular section of the TVR and my favourite engine, a Forney built from brass etchings. I planned to have this diorama placed on my desk so it would have to be smaller than the others I have envisioned. I had two 10” by 10” half inch thick cardboard pieces available which were very light weight to use. I now have been using Gatorfoam for bases which is much better. Once I set my turntable and Forney on the cardboard pieces I found them to be a perfect fit.

The Diorama
Building a 10” by 10” diorama leaves little room for details. Since it is narrow gauge and in HO scale there was just enough room left for a small section of track leading to the turntable, a short length of access road to display a vehicle and of course the clutter that would be found near such a location. Of course the human elements would be also added. Two strong men are positioned to operate the hand driven turntable and a bystander with his dog.

One piece of the cardboard was cut to follow the radius of the turntable swing and glued to the other piece using carpenters glue which formed the one inch thick base. Along the edge of the radius I added a curve of styrene which represents a retaining wall for the turntable pit. The styrene was glued in place using Walthers Goo and painted with Floquil concrete. The pivot location was found and a short length of tubing was inserted and glued in place again using Walthers Goo.  The tubing attached to the turntable could then slide in and swivel.  Railroad ties were stacked for use as stabilisers at the alignment points. These were stained driftwood. Since this was built as a diorama no electrical contacts were added. The base was then painted an earth tone using latex paint, then covered with various colours of ground foams, coal and cinders. The short length of track was hand laid and ballasted using limestone screenings. I also added a small tree and many bushes and weeds to finish off the scenery. The edges of the base had card stock added to give it a finished look, then painted using flat latex green from my White River Division layout face board.

One lesson learned while building this diorama was not to use cardboard, as it did warp on me somewhat.  The one inch thick combined cardboard made a nice light base but is prone to some warping during the addition of scenery using the water soluble technique. I was able to bend the base back into shape.

I have gone on to build three more small dioramas to house some of my remaining two footer structures and equipment during that same modeler’s season. I am happy to say there is a new lease on life for my Carrabassett and Quebec Ry. and now lives on years after I gave up on it...George Dutka

Posted by George Dutka at 05:02 No comments: