As you may have surmised from a number of George's April posts, we recently returned from a seven day jaunt that took us from Southwestern Ontario into the states of New York, New Hampshire, Massachusetts, Vermont, and Maine.  George is a veteran of many such forays into New England, so he knew exactly where he wanted to go.  He planned the route and the itinerary, made the reservations, and did all the driving - all I had to do was keep the accounts and keep my camera at the ready.  My kind of vacation!  The main pretext for the trip was a visit to the Fine Scale Model Railroader Expo at Danvers, Massachusetts.  However, our time at this event was scheduled to be only a little more than one full day, so there was lots of additional time to plan layout tours, hobby shop visits, and railfanning.

The first two days were devoted to covering the distance between home and our Danvers-area hotel.  This left lots of time for railfanning, so we followed the blue skies ( and George's GPS ) into rail sites at Syracuse, Utica, East Deerfield, Greenfield, and Bellows Falls.  Day three started early for us, as George had booked us in for a 9:00 tour of the Bar Mills facility at Bar Mills/Buxton Maine, a location due west of Portland, and at least a two hour drive from our hotel.  Bar Mills was not setting up this year in the vendors section of the show, and was offering these tours as an alternative.

The Bar Mills facility is located in a structure in the front yard of the property belonging to proprietor Art Fahie.  Not just any structure, mind you - this is a 1:1 scale replica of the former SRRL railway station at Strong, Me.  Of course, there is a small scale replica of this replica on display inside.  As soon as you enter the building you take in Art's remarkable Sn2 Wharf St. layout.  As we were the only participants in this particular tour, we were allowed ample time to take photographs.  As well as the layout, nearby shelves were filled with dioramas featuring many of the Bar Mills kits, past and present, in several scales.  These would have been featured in show displays.


Once we had dragged ourselves away from the layout, we were taken on a conducted tour of the manufacturing facilities.  Art quickly turned us over to Lenny, a younger employee ( also a modeller ) who showed us the laser cutter in action, and demonstrated how the metal castings are reproduced.  We were then taken to the second floor where the various kits are packaged and readied for shipment.  Bar Mills kits have been produced in N, HO, S, and O scales.  In addition, kits are being produced at this facility for other manufacturers.

Our two-person tour group never felt rushed while we were there, and George was able to get a "factory direct" price on a BM kit from his wish list.  On the way out the door we were provided with clear directions on how to find the Maine Narrow Gauge Railroad and Museum, our next port of call.  Altogether, this had been a very pleasant experience.

One of the displays at Schomberg this year was the Red Fox layout which is G scale running on On30" track. Brain Fayle built it in 1:24 scale. It is built on a 2' by 3' pink foam with a light frame. The track plan is a loop with 3 sidings, two which are hidden. The history of the line began by servicing a gravel pit which became one serving an amusement park. The background roller coaster is the one in Vancouver based on an image Brian found online. This layout was featured in the Nov/Dec 2004 Narrow Gauge and Shortline Gazette. One can also view it on line at www.brifayle.ca...George Dutka

Posted by George Dutka at 04:44 No comments:

The Thursday before the Fine Scale Expo Peter Mumby and I booked a time slot for a tour of Bar Mills which was included in this years Expo. It was to be about an hour long but by the time we photogarphed the Sn2' layout it turned into nearly two hours. Here are a few views of what we saw that will be followed shortly with views from our tour of the plant...George Dutka

Yesterday was the annual Ontario Narrow Gauge Madness. A great group of narrow minded modelers showed up to take in narrow gauge in many scales. The models and modules are very creative to say the least. Peter Mumby and I hauled up a collection of our narrow gauge modeling to help fill a display table...the photos tell the story...more photos on my White River Division Blog...George Dutka 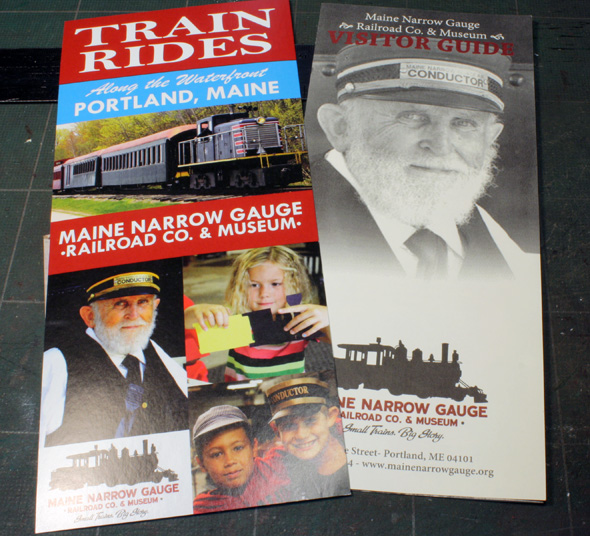 After our visit to Bar Mills Peter and I headed over to the display of narrow gauge equipment along the waterfront in Portland, Maine. The museum is closed on this visit but I will be back for the fall convention to see the engines steaming...George Dutka

While visiting Bar Mills, Art Fahie showed us a model he had built of the Strong station. To begin with Art has already built a full size model of the station which is the office and shop of Bar Mills. I believe he mentioned Banta Modelworks using his model as the prototype for their O scale model kit...George Dutka
Posted by George Dutka at 18:32 No comments:

I had this post ready to go at the end of March for the beginning of year four of my bog, but my computer crapped out on us so here it is a week late...hope the rest of the year goes better.

Peter and I am currently in New Hampshire heading to Bar Mills tomorrow to tour their operation, then off to this years Model Railroad Expo near Boston the following three days. Looking forward to all that we will see. I guess the beginning of year four will be filling you in on what we saw once we make it home...stay tuned...George Dutka
Posted by George Dutka at 18:55 No comments: