The Rangeley Lakes Route
My version of what happened in Maine two foot country during the 1940's.
When I began building my rendition of the Maine Two Footers I had to come up with some kind of history. I really like the looks of mills, ponds and creameries which all came into play while designing my C&Q dioramas. As much of my modeling is in Vermont, I decided to add some of the industry that was doing well there at the time. Milk was not all that big on the narrow gauge lines but it could be on my lower portion of the line.

C&Q history
The Carrabassett and Quebec Ry. came into existence as the other Maine two footers abandoned operations. The C&Q management quickly picked up all the equipment required from the various lines. Some of the structures were even moved to new locations. The Rangeley to Farmington mainline and the branch to Carrabassett of the SR&RL right of way was initially purchased with options on the rest. A route north to Quebec was also planned with some Canadian money coming to the new line. The new lines “owners group” consisted of various hotel owners on Rangeley Lake, a couple of speciality lumber dealers new to the area and the Bellows Falls Creamery from Vermont who had just landed a major contract for “Maine Milk”. Boxcars would have to be converted to milk service. A milk processing facility and a second bottling plant are being converted from structures found along the line. A few new milk pickup loading platforms are also planned in the flat open country. The Rangeley hotel group through some political finagling got the inside track to Boston and New York City, scooping up a nice slice of the tourist business by rail. Surprising if all goes as planned the “Rangeley Lakes Route” could see its busiest days ever ahead.

So now that you know what I have planned for my narrow gauge modeling, check back in the future as my diorama's are discussed...George Dutka
Posted by George Dutka at 04:36 No comments: 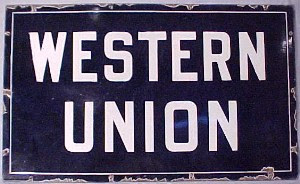 I save views of old signs that could be used on structures I build for my layout and modules. This one could work for many railways and eras. The enamel Western Union sign just needs to be reduced to the size you need and printed up on good quality paper. I have done this with many era appropriate signs in the past...George Dutka
Posted by George Dutka at 21:09 No comments:

The photo seen yesterday is of a HOn30" model I photographed at last fall's Fine Scale Model Railroader Expo. It was included on one of the displays in the diorama's contest category. We will take a look at the photos I took of that display shorty...George Dutka
Posted by George Dutka at 05:36 No comments:

Posted by George Dutka at 04:36 No comments: 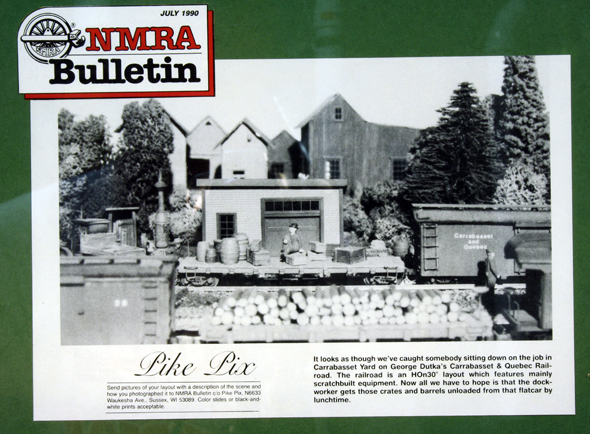 The C&Q Ry. in the Bulletin
Back in the July 1990 NMRA Bulletin I had one of my photo's viewing the Carrabassett yard on my HOn30" C&Q Ry. published. Most of this equipment I still own today. The photo caption is below...George Dutka

"It looks as though we've caught somebody sitting down on the job in Carrabassett Yard on George Dutka's Carrabassett & Quebec Railroad. The railroad is an HOn30" layout which features mainly scratch built equipment. Now all we have to hope is that the dock worker gets those crates and barrels unloaded from that flatcar by lunchtime."
Posted by George Dutka at 05:09 No comments:


Over the years I have built a few tool houses in both HO and O scale. Here we see the two that I have used over the years on  my HO scale modules and dioramas. Built in the 1980's I plan to give them a bit of a face lift this summer...George Dutka 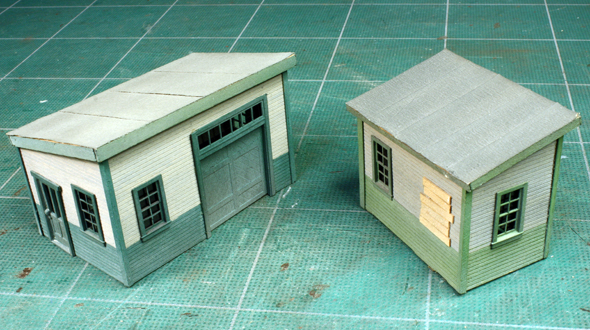 Posted by George Dutka at 05:49 No comments: 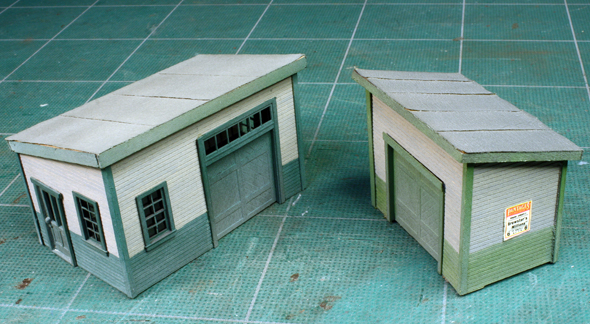