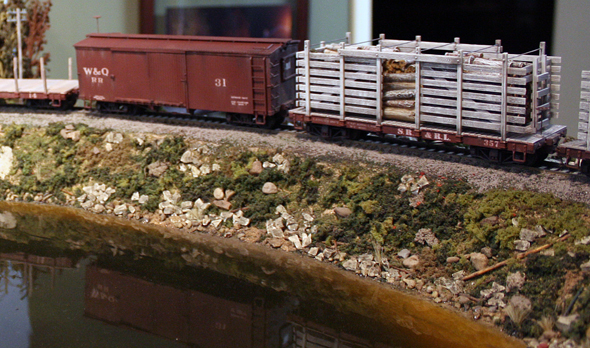 Posted by George Dutka at 04:18 No comments:

A few weeks back I took on a simple project that took me maybe two hours. I decided to beat up my Maine two foot water tank. I had built this back in the early 1980's using what I had available at that time. I thought my tank could use some extra weathering. I decided to pull a few boards and add a few rows of nail holes. The roofing also needed some more soot and weathering. A before view or a look at how my water tank looked for many years can be seen in my April 11 post, Narrow Gauge Place Settings.

The Prototype
I used for insperation Bob Hayden and Dave Frary's plans of the WW&F Week Mills tank found in the Oct. 1967 RMC. The prototype had shingles on the front wall and one end. The rear wall and other end had wood planking. This tank was a larger than normal water facility as it was located at a junction point.

The Model
When I built this structure decades ago I only had enough Campbell's shingles to finish the roof. As two sides were wood planking on the prototype I decided to do all four this way. I used the plans to get the size and shape right but used what I had available to me for windows and doors. They don't actually match up with the prototype but the C&Q is a totally different railway anyhow. As mentioned above I pulled some boards, added some rows of nail holes. Once this was done the whole structure got a coat of Hunterline stain. The walls has the weathering mix applied while the roof got a coat of Cordovan Brown. The whole structure then got a good dose of Bragdon weathering powders applied. Now to build a small diorama as its new home...George Dutka 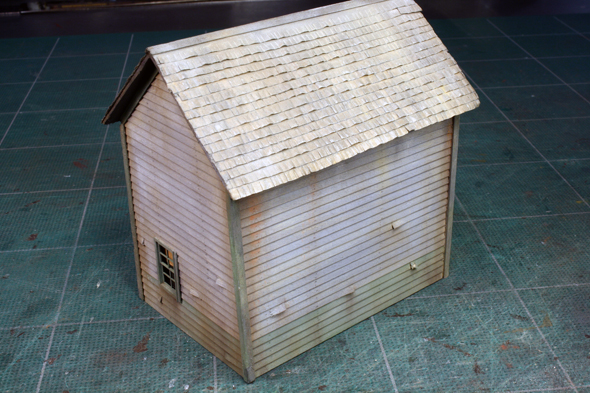 Posted by George Dutka at 08:10 No comments: 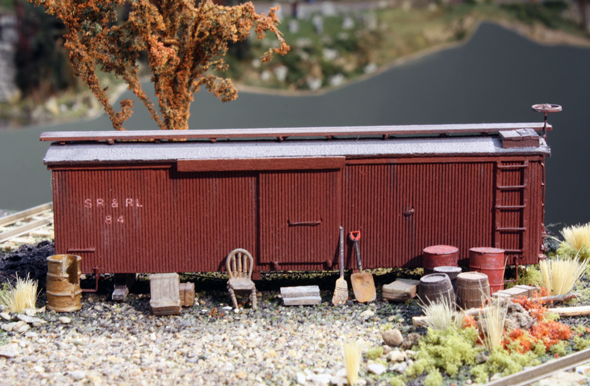 Posted by George Dutka at 05:02 No comments:


I thought I would share with you how my section house looks now that it is placed on my module. I had some comments regarding the dimension's I worked from. I can't reproduce the plans I used but I can give you the lengths and widths...hope this helps...George Dutka 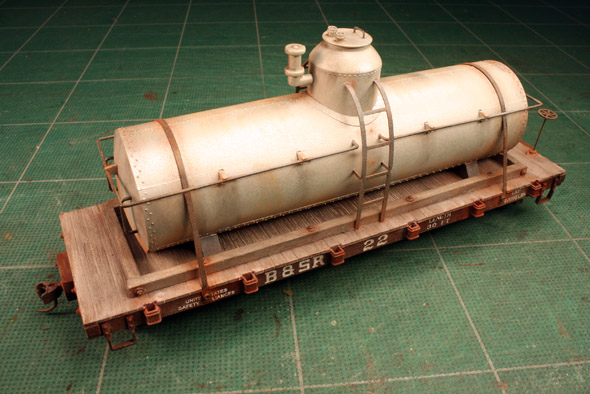 Posted by George Dutka at 04:20 No comments:

The Carrabassett & Quebec Ry.
The current HOn30" Carrabassett & Quebec Ry. is a group of 4 diorama's. The Jct. station, Jct. transfer yard, turntable and gravel pit. The turntable can be found in Wordless Wednesday No. 3. My structures and equipment at one time was part of two modules that had narrow and standard gauge trackage. Once the modules were retired my narrow gauge equipment was stored away for about 20 years. I was at the point of selling it all when I came up with an idea to build diorama's to once again display my narrow gauge work. These diorama's could be at some point used in a small layout. Anyhow once again I am enjoying my Maine Two Footers.

My C&Q pit diorama sits in front of a Richard Brown's New England book on top of my filing cabinet which is located next to my work bench. One day I noted that I could actually use the book as a backdrop if I could get the angle right. The photos below tell the story...George Dutka 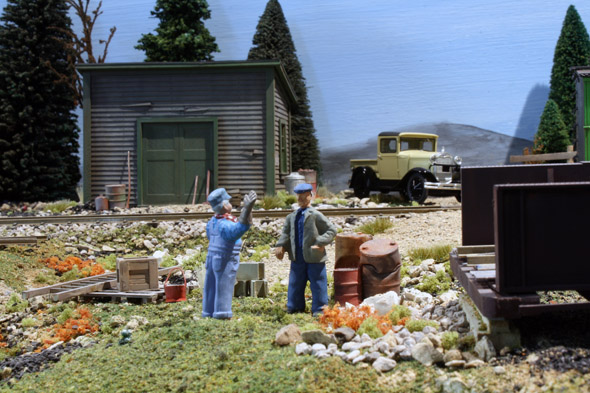 Posted by George Dutka at 05:29 No comments:

The following post is a reprint from my White River Division blog from Oct 2012. I thought it  fit in nicely with my Maine Modeling blogging.

Last spring while Peter Mumby was sorting out some of his model RR equipment he gave me a HOn3 flat that was well built but in need of some work and cleaning. I was not sure at first what I would do with it as I do have a collection of HOn30" rolling stock, but this car was a little larger in size and would not fit in. When I finished my White River Packaging, a Railway Design Associate kit I used one of my HOn30 flats in the photos. I thought that maybe this HOn3 car would work as a permanent addition to the diorama if I changed out the trucks since the siding is HOn30". When I set the flat in the scene it looked right. So the upgrade began.

My plans were to turn the car into a HOn30 flat. I began by giving the car a good brushing to remove all the dust. N scale couplers are mounted to the body so I just removed the trucks and replaced them with a set of N scale trucks without couplers. The car was missing two stirrups and a couple of side pockets. I had similar pockets in my parts box that I used and two new A-Line stirrups.

The under body was painted Floquil Grimy black and the sides are bush painted Floquil caboose red. On the deck I decided to give it some distressing to get the well worn look. I used my hobby knife scoring each board numerous times. I then went back over the same boards with the back of the blade to spread some of the gouges out more. I gave the deck a coat of Floquil grime followed by some streaks of roof brown while still wet. I added steaks of Floquil Flow-Stain pine. This all blends together as it drys.  I brushed various colours of Bragdon Weathering along the deck to finish it off...George Dutka

Posted by George Dutka at 04:22 No comments: 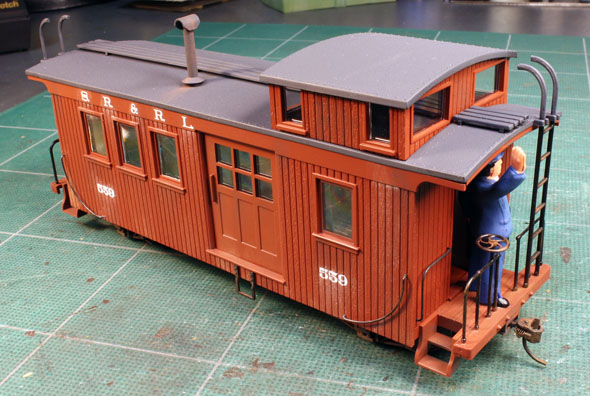 Posted by George Dutka at 05:34 No comments: